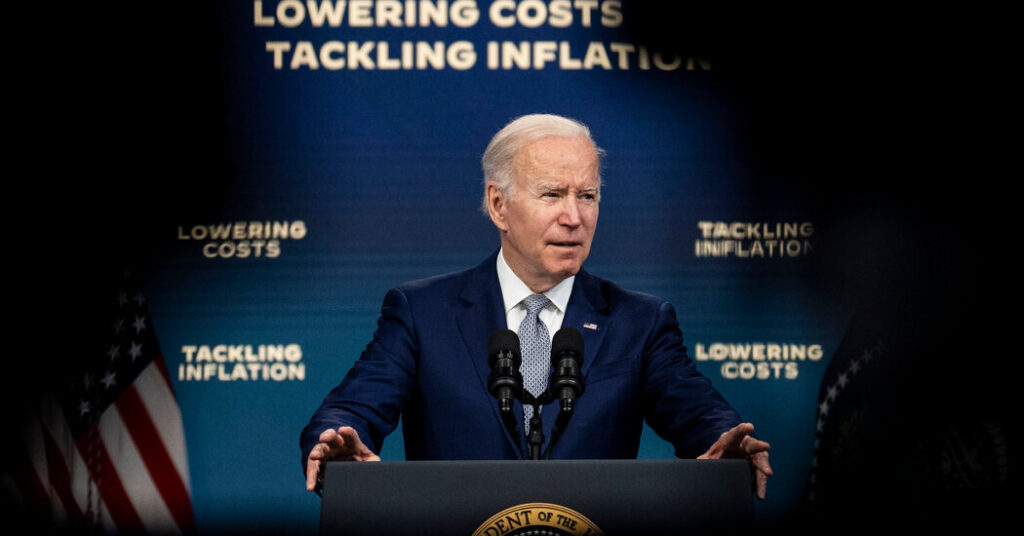 White House Struggles to Talk About Inflation, the ‘Problem From Hell’


WASHINGTON — President Biden was at a private meeting discussing student debt forgiveness this year when, as happens uncomfortably often these days, the conversation came back to inflation.

“He said with everything he does, Republicans are going to attack him and use the word ‘inflation,’” said Representative Tony Cárdenas, Democrat of California, referring to Mr. Biden’s meeting with the Congressional Hispanic Caucus in April. Mr. Cárdenas said Mr. Biden was aware he would be attacked over rising prices “no matter what issue we’re talking about.”

The comment underscored how today’s rapid price increases, the fastest since the 1980s, pose a glaring political liability that looms over every major policy decision the White House makes — leaving Mr. Biden and his colleagues on the defensive as officials discover that there is no good way to talk to voters about inflation.

The administration has at times splintered internally over how to discuss price increases and has revised its inflation-related message several times as talking points fail to resonate and new data comes in. Some Democrats in Congress have urged the White House to strike a different — and more proactive — tone ahead of the November midterm elections.

But the reality the White House faces is a hard one: There is little politicians can do to quickly bring price increases to heel. Federal Reserve policy is the nation’s main solution to inflation, but the central bank tempers price gains by making money more expensive to borrow to cool off demand, a slow and potentially painful process for the economy.

“For a president, inflation is the problem from hell — you can’t win,” said Elaine Kamarck, a senior fellow at the Brookings Institution and the founding director of the Center for Effective Public Management. “Because it’s so difficult economically, politically it is even worse: There’s nothing you can do in the short run to solve it.”

Consumer prices increased by 8.3 percent in the year through April, and data this week is expected to show inflation at 8.2 percent in May. Inflation averaged 1.6 percent annual gains in the five years leading up to the pandemic, making today’s pace of increase painfully high by comparison. A gallon of gas, one of the most tangible household costs, hit an average of $4.92 this week. Consumer confidence has plummeted as families pay more for everyday purchases and as the Fed raises interest rates to cool the economy, which increases the risk of a recession.

The White House has long realized that rising prices could sink Mr. Biden’s support, with that risk telegraphed in a series of confidential memos sent to Mr. Biden last year by one of his lead pollsters, John Anzalone. Inflation has only continued to fuel frustration among voters, according to a separate memo compiled by Mr. Anzalone’s team last month, which showed the president’s low approval rating on the economy rivaling only his approach to immigration.

“Economic sentiment among the public remains poor, with most worried about both inflation and the possibility of a recession in the coming months,” according to the memo, dated May 20. The information was sent to “interested parties,” and it was not clear if the White House had received or reviewed the memo.

The polling data shows that about eight in 10 Americans “consider the national economy to be in poor condition” and that “concerns are high about the potential for an economic recession in the near future.”

Economic anxieties have been echoed by members of Congress, leading academics and pop culture standard bearers. “When y’all think they going to announce that we going into a recession?” Cardi B, the Grammy-winning rapper, wrote in a tweet that went viral this weekend.

The White House knows it is in a tricky position, and the administration’s approach to explaining inflation has evolved over time. Officials spent the early stages of the current price burst largely describing price pressures as temporary.

When it became clear that rising costs were lasting, administration officials began to diverge internally on how to frame that phenomenon. While it was clear that much of the upward pressure on prices came from supply chain shortages exacerbated by continued waves of the coronavirus, some of it also tied back to strong consumer demand. That big spending had been enabled, in part, by the government’s stimulus packages, including direct checks to households, expanded unemployment insurance and other benefits.

Some economists in the White House have begun to emphasize that inflation was a trade-off: To the extent that Mr. Biden’s stimulus spending spurred more inflation, it also aided economic growth and a faster recovery.

“Inflation is absolutely a problem, and it’s critical to address it,” Janet L. Yellen, the Treasury secretary, recently told members of Congress. “But I think at the same time, we should recognize how successful that plan was in leading to an economy where instead of having a large number of workers utterly unable to find jobs, exactly the opposite is true.”

But the president’s more political aides have tended to sharply minimize that the March 2021 package, known as the American Rescue Plan, helped to goose inflation, even as they have claimed credit for strong economic growth.

“Some have a curious obsession with exaggerating impact of the Rescue Plan while ignoring the degree high inflation is global,” Gene Sperling, a senior White House adviser overseeing the implementation of the stimulus package, wrote on Twitter last week, adding that the law “has had very marginal impact on inflation.”

Brian Deese, the director of the National Economic Council, acknowledged in an interview last week that there were some disagreements among White House economic officials when it came to how to talk about and respond to inflation, but he portrayed that as a positive — and as something that is not leading to any kind of dysfunction.

“If there wasn’t healthy disagreement, debate and people feeling comfortable bringing issues and ideas to the table, then I think we would be not serving the president and the public interest well,” he said.

He also pushed back on the idea that the administration was deeply divided on the March 2021 package’s aftereffects, saying in a separate emailed comment that “there is agreement across the administration that many factors contributed to inflation, and that inflation has been driven by elevated demand and constrained supply across the globe.”

How to portray the Biden administration’s stimulus spending is far from the only challenge the White House faces. As price increases last, Democrats have grappled with how to discuss their plans to combat them.

The president and his top political aides have trotted out a few main talking points, including blaming President Vladimir V. Putin’s invasion of Ukraine for what Mr. Biden calls the “Putin price hike,” pointing to deficit reduction as a way to lower inflation and arguing that Republicans have a bad plan to deal with rising costs. Mr. Biden regularly acknowledges the pain that higher prices are causing and has emphasized that the problem of taming inflation rests largely with the Fed, an independent entity whose work he has promised not to interfere with.

The administration has also highlighted that inflation is widespread globally, and that the United States is better off than many other nations.

Corinthian Colleges. In its largest student loan forgiveness action ever, the Education Department said that it would wipe out $5.8 billion owed by 560,000 students who attended Corinthian Colleges, one of the nation’s biggest for-profit college chains before it collapsed in 2015.

The renewed messaging comes as Mr. Biden and his top aides have grown increasingly concerned about the public’s negative views of the economy, according to an administration official. Economists within the administration are more sidelined when it comes to setting the tone on issues like inflation than in previous White Houses, another person familiar with the discussions said.

So far, the talking points have done little to change public perception or to mollify concerns on Capitol Hill, where some Democrats are pushing for the White House to find a more compelling story.

“There has to be more of a laser focus on the economy, a bolder message, a clearer story,” said Representative Ro Khanna, a California Democrat who wrote a New York Times opinion piece last week saying that Democrats need a more ambitious plan for fighting inflation. He added that “rhetoric about ‘Well, we’re doing really well’ does not capture the profound sense of anxiety that Americans feel.”

Part of the difficulty is that there is only so much politicians can do to fight price increases.

The White House has taken steps to blunt the impact of inflation or to help supply catch up with demand. It has released strategic petroleum reserves to help slow gas price increases and pushed to unclog ports, for example.

Most of the tweaks are helping only around the edges. Yet inflation factors into the discussion over every decision the White House entertains.

This spring, Mr. Biden suspended a ban on summertime sales of higher-ethanol gasoline blends to try to temper price increases at the pump, spurring frustration among climate activists still angry over the collapse of the president’s climate and social-spending package.

Talks over whether to roll back Trump-era tariffs on Chinese goods have also gotten caught in the inflation maw. Ms. Yellen has said she supports relaxing tariffs to help ease prices, but other Democrats are wary that removing them would make Mr. Biden look weak on China.

Inflation is also influencing conversations about whether to forgive student loan debt, one of Mr. Biden’s key campaign promises. Economists in the administration think that loan forgiveness would, at most, push inflation up a little bit by giving people with outstanding student debt more financial wiggle room. But some economists in the administration’s orbit have expressed concern about the possibility of doing something that could stimulate demand — even slightly — at a moment when it is already hot.

To help mute the inflationary effect, forgiveness would most likely be accompanied by a resumption of interest payments on all student loans that have been paused since the pandemic.

For now, the administration is considering forgiving at least $10,000 for borrowers in a certain income range, according to people familiar with the matter. Mr. Cárdenas said that Mr. Biden knew he would be attacked over inflation but that he did not think the issue would prevent the president from canceling at least $10,000 worth of debt.

“Will it affect him going beyond that? It may,” he said.