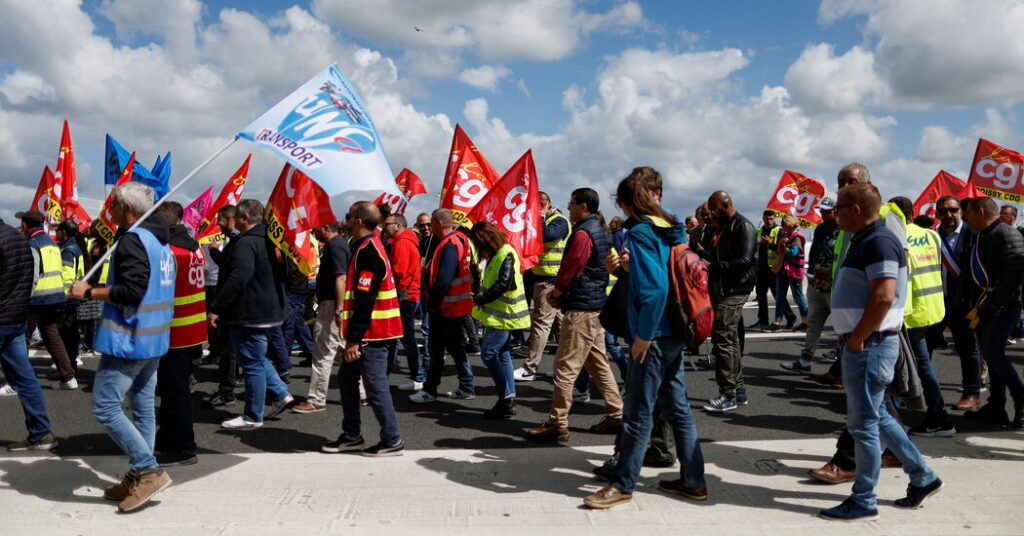 Why Airport Employees Are Striking


PARIS — For 18 years, Marie Marivel has worked as a security agent at Charles de Gaulle Airport in Paris, screening throngs of passengers and thousands of bags each day. It has always been a taxing job, she says, but conditions have lately made it downright impossible, as staffing shortages nearly double her workload and a cost-of-living crisis plunders her modest paycheck.

As security agents, ground crews, baggage handlers and other airport workers in Paris begin a series of strikes on Friday to demand better wages and more hiring, Ms. Marivel, 56, is eager to join the fight.

The end of pandemic restrictions across Europe touched off a huge revival in air travel, said Ms. Marivel. “But we are flagrantly understaffed. And we can no longer make ends meet,” she said. “Workers are demanding more.”

Europe is bracing for a summer of labor unrest as soaring inflation and labor shortages incite protests across the economy, in sectors as varied as the steel industry and garbage collection. The strife is most visible in transport, where overstretched work forces at airlines, airports and railways have begun unleashing crippling walkouts. A rail strike in Britain last week was the largest in the country in 30 years.

Several walkouts are planned for this weekend and beyond. Security employees at Hamburg Airport in Germany are expected to conduct a daylong strike on Friday, demanding better wages. Pilots of the Scandinavian airline SAS are threatening to strike on Saturday as unions negotiate with the company for higher pay. The check-in staff of British Airways will walk off the job later this month, agitating for better conditions at Heathrow Airport.

Late Friday, French news reports said the country’s civil aviation authority had announced that one in five flights at Charles de Gaulle Airport would be canceled on Saturday because of continuing strike action.

The start of Europe’s summer travel season had already been marred by chaos at airports, train stations and major tourist destinations as industry operators struggled to meet a resurgence in demand. Thousands of flights have been canceled and thousands more are being cut through August by airlines such as Lufthansa and easyJet as companies scramble to find staff or face job walk-offs.

In Germany, the aviation hiring squeeze has become so dire that the government will fast-track thousands of foreign workers, mainly from Turkey, in the coming weeks to relieve staff shortages in security, check-in and aircraft handling.

Waits of four hours or longer in security lines at major airports like Heathrow in London and Schiphol in Amsterdam — where travelers were advised to “wear comfortable shoes” for the staggeringly long delays at check-in — have been tamed, however temporarily.

They are likely to flare up again as unions in countries including Spain and Sweden plan a fresh wave of industrial protests.

At European airports, baggage handlers, ground crews and other workers are employed by companies outsourced by the airlines and airports to provide services at low costs, a legacy of a European Union policy that aims to liberalize competition in the sector. At Charles de Gaulle Airport, where Ms. Marivel works, one union said more than 800 contract companies provided staffing for a wide range of services, including check-in and bathroom cleaning.

Hundreds of thousands of those jobs were cut in the past two years as air travel was grounded because of the pandemic. Now, as the demand for flying has suddenly risen, the travel industry finds itself with more than 100,000 job vacancies because of layoffs and worker resignations during pandemic lockdowns.

“Working conditions have deteriorated so much that the sector is not attractive,” said Eoin Coates, the head of aviation at the European Transport Workers’ Federation. Wages are low, he said, and many of the jobs slice the workday into unappealing shifts that start before dawn or last until midnight or later.

“Meanwhile, across the economy, income and purchasing power have been reduced,” he added. “People are at the end of their patience.”

Inflation in the eurozone reached 8.6 percent in June — the highest in decades. Hourly wages have started to rebound modestly after falling during the pandemic, but labor organizations say the recovery is not nearly enough to catch up with the cost of living.

For Europe’s mammoth tourism sector, the strike threat could not be more critical. The airline industry has been banking on a strong summer to offset high fuel costs, and tourism destinations need a travel rebound to help revive national economies.

In at least one case, the labor pressure is paying off. At Amsterdam Schiphol Airport, where a shortage of ground personnel led to near-riots by some travelers who couldn’t make their planes after hours in security lines, management and unions struck a deal for a pay increase and improved working conditions across the airport. The accord aims to curb what unions said was a race to the bottom among airport contractors competing for work through low wages and precarious contracts.

The airport hopes the changes will attract new recruits. Higher costs are likely to be borne by airlines and, ultimately, passed on to travelers through ticket prices, but the alternative is further delays and cancellations that could be considerably more expensive.

“Workers are not only in a good position, but they have good reasons to bargain and ask for higher wages in this context,” said Laura Nurski, a labor economist at Bruegel, a think tank in Brussels. “The airline companies try to offer low fares,” she said. “But when you fly cheap, the cost comes from the wages or conditions of the people who work there.”

Ms. Marivel, the Paris airport worker, is among those who say such conditions are no longer sustainable. Her monthly take-home pay is around 1,500 euros (about $1,560), she said, and her monthly rent is €900. Rising prices for energy, gasoline and food now eat up her paycheck before the next payday comes around.

“Most of us are in the same position,” said Ms. Marivel, who works for ICTS France, a company contracted by the Paris airport authority to supply workers to inspect luggage and provide for security.

“Our salaries haven’t kept up, and everyone is tightening their belts,” added Ms. Marivel, who is also a member of the Confédération Générale du Travail, one of the French unions pressing for higher wages.

At the same time, companies like the one Ms. Marivel works for have struggled to replace people who quit or were let go during pandemic lockdowns, straining the remaining employees. Some of the jobs require weekend work, or working different shifts through the day and night.

Aéroports de Paris, which runs the Charles de Gaulle and Orly airports, said in a statement that it still needed to find at least 4,000 workers. ICTS did not respond to a request for comment.

“A lot of people left because they realized that there is life beyond working crazy hours for low pay,” Ms. Marivel said. “The salaries just aren’t good enough for the conditions.”

During a recent campaign to hire 400 people from an unemployment center near the airport, only 20 people took a job, she added. “Some of them come to work, they stay half a day. They go on a meal break, and then we don’t see them again,” said Ms. Marivel, whose union is demanding a €300-a-month increase.

Whether the momentum will last remains to be seen. The leverage is on the side of workers for now, but the very conditions that led to higher wage demands are likely to cool, said Daniel Kral, a senior economist at Oxford Economics.

“We have big cyclical rebound and reopening tailwinds, which are creating labor shortages,” he said. “But we are also entering a difficult period: There are huge recession fears, central banks are tightening policy. So this will have a cooling effect on the labor market further down the road.”

Although many people are splurging after two years without a vacation, the record surge in inflation could quickly dampen the demand for travel and the spending spree.

“With inflation sky high, people are worried about the future, so that will have a big effect on consumers,” Mr. Kral said. “People are spending like crazy now, but they’re going to sober up.”