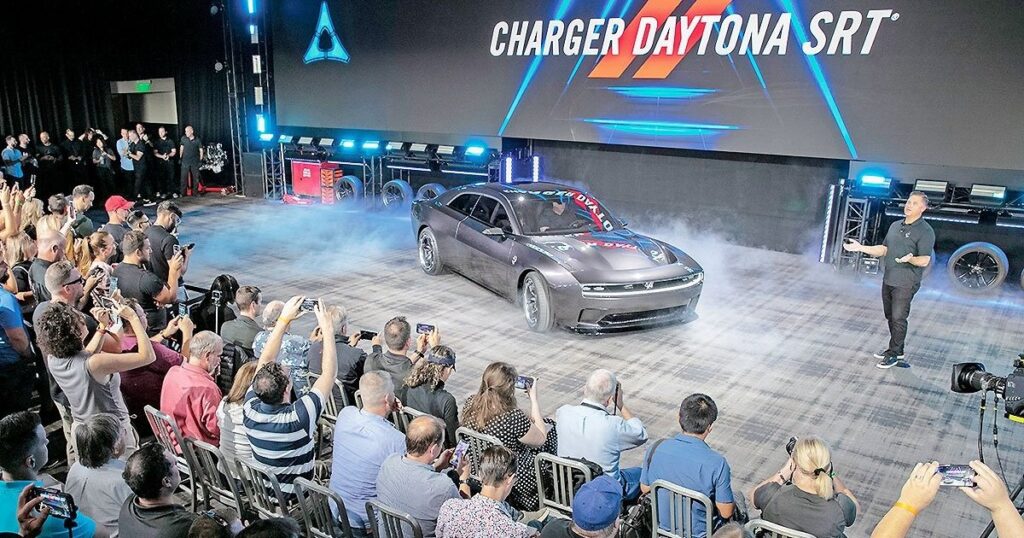 Why Dodge is holding on to roar in EV era


Kuniskis said the brand needed to do an EV the “Dodge way” with patents, innovations and performance that would “reverberate through the entire industry.” Engineers inventing the future of Dodge, he said, developed an EV “that you didn’t see coming, but you’ll definitely hear it coming.”

The Daytona SRT has an industry-first EV simulated exhaust system that produces up to 126 decibels through an amplifier and tuning chamber at the rear. At a media event to unveil it, a booming voiceover asserted that even though Dodge is going electric, the brand still intended “to remain loud” and “to be irrational.”

Dodge’s first electric car is due in 2024, after the gasoline-powered Challenger and Charger go out of production next year.

Names that have long defined Dodge muscle such as Hemi, Hellcat and Redeye will give way to a new kind of performance, called Banshee. The 800-volt Banshee propulsion system, Dodge says, makes the Charger Daytona EV surpass a Hellcat in all key performance measures.

Randy Dye, chairman of the U.S. Stellantis National Dealer Council, said he thought the concept’s sound was “insane” when he first heard it.

Dye said Dodge has a clearly established identity that many consumers like, and he’s glad it isn’t straying from that as it moves into electrification. Dye, who owns Daytona Dodge-Chrysler-Jeep-Ram in Florida, believes Dodge made a statement with the concept’s design: EVs don’t have to be “generic” or “ugly.”

“Electric vehicles can be beautiful,” Dye said. “They can look powerful and they are going to be powerful, so I think it’s just another way to do power.”