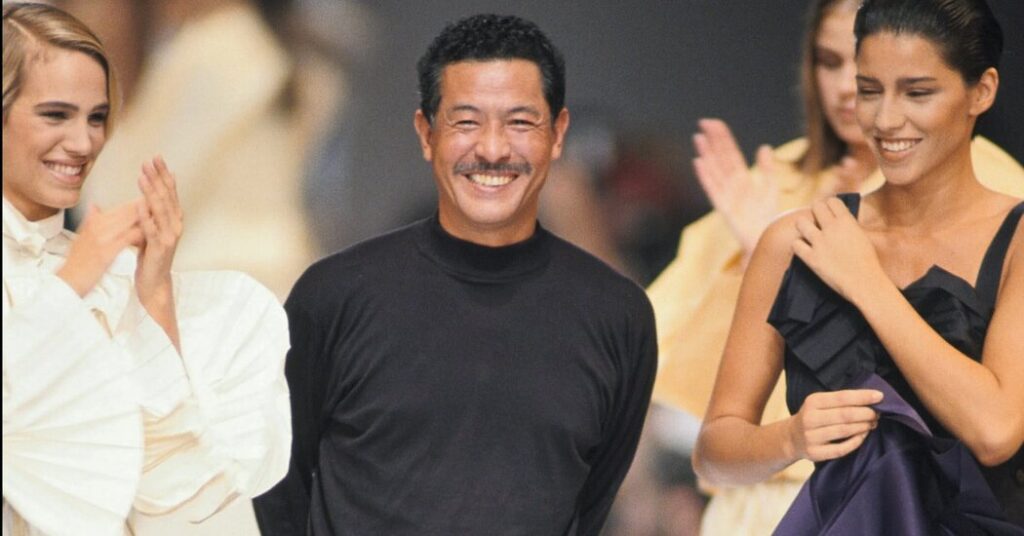 The man behind Mr. Jobs’s personal uniform of black mock turtlenecks, who died on Aug. 5 at age 84, was a pioneer in all sorts of ways — the first foreign designer to show at Paris Fashion Week (in April 1974), among the first designers to collaborate with artists and a proponent of “comfort dressing” long before the term ever existed. But it was his understanding and appreciation of technology and how it could be harnessed to an aesthetic point of view to create new, seductive utilities that set Mr. Miyake apart.

It began in 1988 with Mr. Miyake’s research into the heat press, and how it could be used to create garments that started as fabric two or three times larger than normal, which was then pressed between two sheets of paper and fed into an industrial machine that shaped it into knife-edge pleats, which in turn became garments that never wrinkled, fell flat or required any complicated fastenings. By 1994, those garments made up a line of their own known as Pleats Please (later spun into a men’s wear version, Homme Plissé): a re-engineering of the classic Grecian drapes of Mario Fortuny into something both practical and weirdly fun.

So it went: Next came an experiment involving a continuous piece of thread fed into an industrial knitting machine to create one piece of cloth with inbuilt seams that traced different garment shapes — which could in turn be cut out as desired by the wearer, thus eliminating manufacturing detritus. Known as A-POC (a piece of cloth), the collection was introduced in 1997, decades before “zero waste” became a clarion call of the responsible fashion movement.

And then there was 132 5, which Mr. Miyaki debuted in 2010 (after he had stepped back from his day-to-day responsibilities but remained involved with his brand). Inspired by the work of computer scientist Jun Mitani, it comprised flat-pack items in complex origami folds that popped open to create three-dimensional pieces on the body. The collection was developed in conjunction with Mr. Miyaki’s in-house research and development team, founded in 2007 and known as Reality Lab. (The name — not to be confused with Meta’s Reality Labs division, though arguably its forerunner — was later also used for a retail store in Tokyo.)

Pieces from all of these lines are now included in the collections of museums such as the Metropolitan Museum of Art, the Museum of Modern Art, the Victoria & Albert Museum and the Los Angeles County Museum of Art. They are extraordinary — soft sculptures that morph and move with the body — but what makes them singular is that they were conceived not just as beautiful things but as solutions to everyday needs (a Miyake basic value was the importance of “clothes for living”). And they functioned as such.

This is where the black turtleneck comes in. It was not by any means Mr. Miyake’s most interesting garment. It may even have been his most banal. But it embodies his founding principles and serves as the door through which anyone not particularly interested in fashion could walk to discover the Miyake universe. Mr. Jobs did just that.

Indeed, it is not incidental that Mr. Jobs’s own exposure to Mr. Miyake came through technology. Or so the late Apple founder, told Walter Isaacson, his biographer.

According to Mr. Isaacson’s book, “Steve Jobs,” Mr. Jobs was fascinated by the uniform jacket Mr. Miyake created for Sony workers in 1981. Made from ripstop nylon with no lapels, it included sleeves that could be unzipped to transform the jacket into a vest. Mr. Jobs liked it and what it stood for (corporate bonding) so much that he asked Mr. Miyake to make a similar style for Apple’s employees — though when he returned to Cupertino with the idea, he was “booed off the stage,” he told Mr. Isaacson.

Still, according to Mr. Isaacson’s book, the two men became friends, and Mr. Jobs would often visit Mr. Miyake, ultimately adopting a Miyake garment — the black mock turtleneck — as a key part of his own uniform. It was a garment that did away with an extraneous fold at the neck, that had the ease of a T-shirt and a sweatshirt but also the cool, minimal lines of a jacket.

Mr. Miyake made him “like a hundred of them,” Mr. Jobs, who wore them until his death in 2011, said in the book. (Mr. Isaacson wrote he saw them stacked in Mr. Jobs’s closet, and the book’s cover features a portrait of Mr. Jobs wearing, natch, a black mock turtleneck.)

Even more than his Levi’s 501s and New Balance shoes, the turtleneck became synonymous with Mr. Jobs’s particular blend of genius and his focus: the way he settled on a uniform to reduce the number of decisions he had to make in the mornings, the better to focus on his work. It was an approach to dress later adopted by adherents including Mark Zuckerberg and Barack Obama. Also his ability to blend soft-corner elegance and utility in not just his own style but the style of his products.

As Ryan Tate wrote in Gawker, the turtleneck “helped make him the world’s most recognizable C.E.O.” Troy Patterson of Bloomberg called it “the vestment of a secular monk.” It was so embedded in pop culture that Elizabeth Holmes of Theranos later adopted it when she was trying to convince the world of her own Jobs-like brilliance, even though Mr. Miyake’s brand retired the style in 2011, after Mr. Jobs’s death. (An updated version was reintroduced in 2017 as “The Semi-Dull T.”)

It didn’t matter. At that point, the whole ethos of the garment had been transformed. Before Mr. Jobs encountered Mr. Miyake, after all, the black turtleneck was largely the province of beatniks and Samuel Beckett, associated with clove cigarettes, downtown and poetry readings (also ninjas, cat burglars and anyone who wanted to blend into the night). Afterward, it meant paradigm shifts.

But it would not have without Mr. Miyake. Mr. Jobs was not the typical muse of fashion cliché. But even more than the architects and artists who have gravitated toward Miyake clothing, he has become the designer’s ambassador to history: a genuinely populist part of a legacy that helped shape not just the rarefied inner sanctum of design, but the essence of how we think about dress.