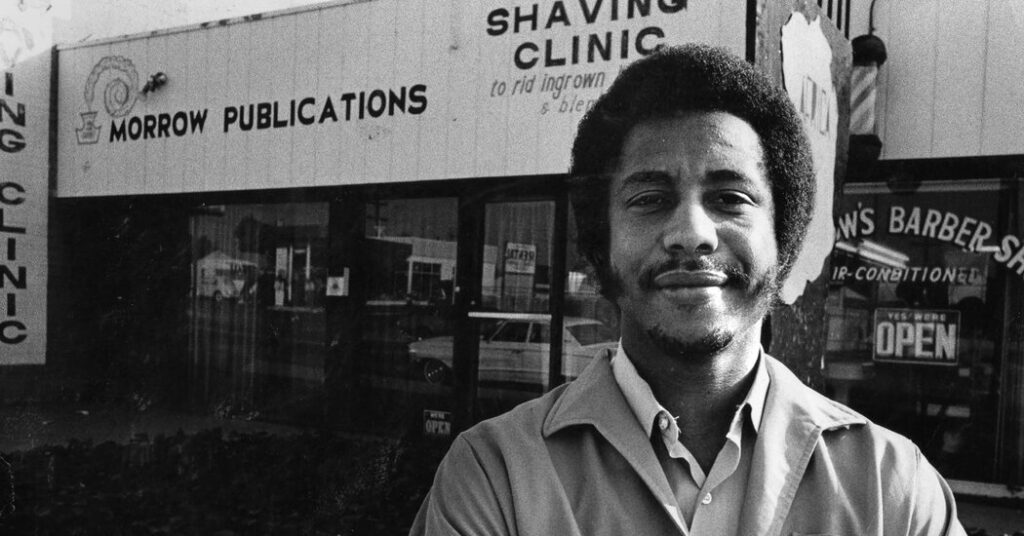 
Willie Lee Morrow, a son of Alabama sharecroppers who built a business empire around hair care products aimed at African American consumers, among them a comb designed to work with the natural styles that exploded in popularity in the 1960s — a tool he called the Afro Tease, but which came to be known as the Afro pick — died on June 22 at his home in San Diego. He was 82.

His daughter Cheryl Morrow said the cause was pneumonia.

Mr. Morrow was already a successful barber on the east side of San Diego when a family friend, Robert Bell, walked into his shop in 1962. Mr. Bell had just returned from studying in Nigeria, and he brought Mr. Morrow a gift: a traditional wooden comb, with long, stiff tines spaced well apart, meant to tease out curly hair.

Mr. Morrow had never seen anything like it, but it could not have landed in his hands at a better time. For generations, many Black people had viewed their naturally kinky hair as a liability, and either trimmed it close to the scalp or straightened it, often using painfully caustic chemicals to do so.

But the civil rights movement produced a generation of young Black people eager to assert their freedom from oppressive aesthetics. Natural hair was becoming as much a political statement as a style choice, a physical expression of the emerging Black Power ethos.

The blowout, later known as the Afro, became the dominant style. But it presented a new challenge to barbers like Mr. Morrow.

“The Afro caught everybody off guard,” he told Ebony magazine in 1970. “Even Black barbers and beauticians in America were caught lacking the knowledge as well as the desire to style a decent Afro.”

An inveterate innovator, Mr. Morrow spent years working on his pick design, at first making wooden picks in the back of his shop before he landed on a plastic version that could be mass produced. Eventually he had seven models, one of them a blow-dryer attachment, and he was selling about 12,000 picks a week.

Based on his growing reputation, the Department of Defense contracted with him in 1969 to train its thousands of barbers and beauticians to work with Black hair.

“Until fairly recently, the Black person was self-conscious about his curly, kinky hair,” he told The New York Times in 1971. “He or she would spend a fortune trying to take the curl out. That made it easy for the military. They would simply run the clippers closely over a Negro’s head — no problem at all.”

Over the next few years, Mr. Morrow logged tens of thousands of miles visiting bases around Asia, Europe and the United States, giving workshops to military and local civilian barbers. He claimed he was the youngest person ever to log a million miles on Delta Air Lines.

Of course, not everyone wanted an Afro, even at the height of the Black Power era, and so alongside the pick he developed dozens of other hair care products, many of them straightening and softening treatments that were gentler than the conventional chemicals then in use.

By the mid-1970s he had a product called Tomorrow Curl, which began to take off in 1977 when he changed the name to California Curl. It gave his customers’ hair a soft and shiny look, and like the pick, it was easy to use.

Again, his timing was perfect. The Afro was waning in popularity, and young people were looking for a new style. But when Mr. Morrow decided to market his product exclusively to hair care professionals, other companies moved in. Jheri Redding, another California hairdresser, reformulated a product he already had on the market for white hair and sold it directly to Black consumers.

By the 1980s, the hottest hair style among young African Americans was the Jheri curl, named for its popularizer if not its inventor.

Willie Lee Morrow was born on Oct. 9, 1939, in Eutaw, Ala., a farming town southwest of Birmingham. His parents, Hollie and Olean (Jordan) Morrow, were sharecroppers, and his father sold bootleg whiskey on the side.

Along with his daughter Cheryl, he is survived by his wife, Gloria (Lacy) Morrow, and another daughter, Angela Morrow. A son, Todd, died before him.

One of eight children, Willie started work at an early age. He later said that once he realized that only the very best students in school had a shot at college, he decided to find another way out of poverty and soon landed on barbering. He started cutting hair when he was 13.

He moved to San Diego in 1959, part of a wave of Black Southerners drawn to Southern California’s warm climate and promise of plentiful jobs.

He attended barber school, joined a salon and, when its owner decided to retire, bought him out for $5,000. Soon it was a cornerstone of Black life in San Diego, and Mr. Morrow was the barber of choice for pro athletes, California politicians, musicians and movie stars.

“The first time I cut my hair I went to that barbershop and discovered that it was a whole culture, where people would laugh talk, talk about politics, talk about social issues, talk about life,” Starla Lewis, a professor emerita of Black studies at San Diego Mesa College, said in a phone interview. “It was a community for many, many decades.”

Mr. Morrow wrote more than a dozen books, most of them manuals like “The Principles of Cutting and Styling Negro Hair” (1966), as well as a history, “400 Years Without a Comb” (1973), which traced the story of Black hair care from Africa through slavery to the present.

Mr. Morrow later branched out into media. He started San Diego’s first Black-centered radio station in 1979 and a newspaper, The San Diego Monitor, in 1986. He made most of his products next door to his salon, having expanded to take over almost the entire block, and he employed some 200 people. A 10-foot Afro pick stood out front.

He eventually handed over most of his business to his daughter Cheryl, though he continued to come to work almost every day — if not to cut hair, then to putter in his laboratory, always looking for another new idea.

PrevPreviousHer ‘Chagall’ Is Headed for the Trash. How’s That for Caveat Emptor?
NextGlobal Oil Prices Dip Below $100 as Recession Fears SpreadNext