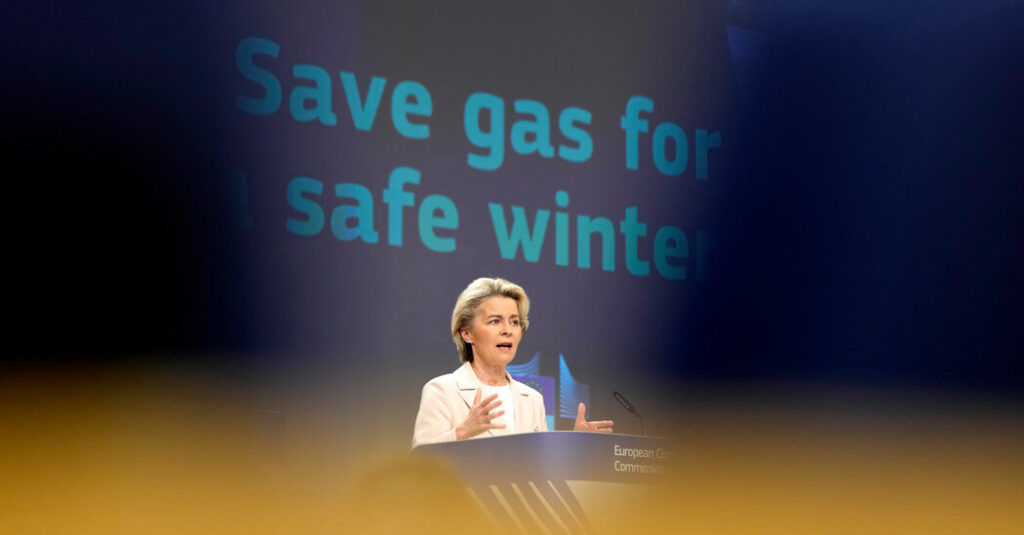 With Russian Cutoff Feared, Europeans Are Told to Curb Natural Gas Use


BRUSSELS — Europe must cut its use of natural gas by 15 percent from now through next spring to prevent a major crisis as Russia slashes gas exports, the European Union’s executive branch said on Wednesday, calling for hard sacrifices by the people of the world’s richest group of nations.

“Russia is blackmailing us,” the European Commission president, Ursula von der Leyen, said as she introduced the E.U. plan to reduce gas consumption. “Russia is using energy as a weapon.”

Months before it invaded Ukraine in February, upending energy markets and other facets of the global economy, “Russia kept gas supply intentionally as low as possible despite the high gas prices,” she said.

The flow of Russian gas, which provides 40 percent of E.U. consumption, was less than one-third the normal average in June. Gas storage facilities in Europe, normally almost full at this point in the year in preparation for winter, are not sufficiently stocked to deal with such volatility and shortages, threatening to upend industry and private lives alike.

“We have to prepare for a potential full disruption of Russian gas, and this is a likely scenario,” Ms. von der Leyen said.

The European Union has already banned most imports of Russian oil, after painstaking negotiations this spring among the 27 member states that made exceptions for some small countries like Hungary and Slovakia. The plan to cut gas use is expected to be much easier to adopt when E.U. energy ministers meet in Brussels next Tuesday, because unlike the oil embargo, it does not require unanimity.

If member nations agree to the plan and the new legislation that goes with it, the commission, the bloc’s executive arm, would ultimately be able to force countries to stick to gas consumption limits if they fail to do so voluntarily. The commission’s proposal did not specify what enforcement mechanism would be used.

Russia’s foreign minister, Sergey Lavrov, on Wednesday acknowledged that his country has broader ambitions in Ukraine that it had previously admitted, the latest indication that the war is nowhere near finished, despite a pause in Moscow’s eastern offensive. Moscow has repeatedly changed its description of its war aims, giving contradictory statements about whether it meant to topple Ukraine’s government or annex territory.

In recent months the Kremlin has cast the war as being primarily about seizing the Donbas region in the east, but Mr. Lavrov spoke of holding captured territory in the Kherson and Zaporizhzhia areas in the south, as well. A U.S. National Security Council spokesman said Wednesday that Russia means to annex conquered territory, justifying it with sham referendums.

European public opinion is split over whether supporting Ukraine is worth the sacrifice, and President Vladimir V. Putin of Russia is counting on Europeans being unwilling to pay a high price for Ukrainian freedom, and pressuring their leaders to strike a deal with Moscow.

Still, public fatigue with Europe’s support of Ukraine may be overstated. A poll in Germany, the largest E.U. nation and the one most reliant on Russian gas imports, last week found that only 22 percent wanted their government to curb support to Ukraine to bring down energy prices; 70 percent of respondents said they wanted the German government to continue strongly backing Ukraine despite the economic fallout.

In the fight for public opinion, Olena Zelenska, the wife of President Volodymyr Zelensky of Ukraine, addressed the U.S. Congress on Wednesday, asking for more weapons to defend against what she called the “Russian hunger games.”

“An unprovoked invasive terrorist war is being waged against my country,” she added. “Russia is destroying our people.”

One obstacle to the E.U. plan to cut gas use is that it makes a uniform demand that each country cut consumption by 15 percent between Aug. 1 and March 31, which may be seen as unfair to those like Italy, Spain and France that do not buy much gas from Russia.

The main argument to get all E.U nations on board, despite their different levels of vulnerability, is that the bloc’s economies are so interconnected that a blow to one is a blow to all.

“The choice we have today is triggering solidarity now or waiting for an emergency that will force solidarity upon us,” said Frans Timmermans, a senior Dutch politician who is the commission’s energy and climate czar.

He said savings in gas around the E.U. would create spare capacity to direct to the countries most in need in the wintertime, ensuring that no member state goes into economic shock because of the lack of power.

Ms. von der Leyen, putting a political spin on a seemingly economic issue, said this approach would deliver a blow to Mr. Putin, who wants to sow discord within the European Union, undermining the bloc and its most powerful countries economically and politically. Determined to make that backfire on him, European leaders have drawn closer together since the war began and have taken the first step toward possibly making Ukraine an E.U. member — something Mr. Putin set out to prevent.

“Putin is trying to push us around this winter and he will dramatically fail if we stick together,” Ms. von der Leyen said.

With Russia having slashed or completely cut gas supply to a dozen E.U. countries already, and the looming threat that it will not fully reconnect an important pipeline on Thursday that has been offline for maintenance, the bloc’s alternatives are few. Mr. Putin suggested late Tuesday that natural gas would resume flowing to Europe through the pipeline, but warned that supplies may be severely curtailed.

Experts say that, along with E.U. efforts to line up new suppliers, cutting demand for gas is the only way to survive relatively unscathed this winter.

Simone Tagliapietra, an expert at the Bruegel think tank in Brussels, said the European Commission plan “goes in the right direction,” but he warned that a lot hinges on clear and honest communication between governments and Europeans.

“This requires serious and straightforward communication to the public,” he said. “Governments must ask people to consume less and should have the courage to tell their citizens that Europe is in the midst of what possibly represents the greatest energy crisis in its history.”

The commission itself recognized the importance of appealing directly to the public, and said in its proposal that a critical part of its plan was a mass-media campaign urging people to do their part to conserve, primarily by cutting heating and cooling at home.

The commission predicts that major disruptions to the flow of Russian gas could shave off as much as 1.5 percentage points off an already-degraded economic growth forecast of 2.7 percent this year, and could even plunge the bloc into recession next year.

When the war began, the European Union responded with sanctions on Russia but cutting off energy imports was seen as a distant prospect, at most. Within months, positions had hardened enough to impose a near-total embargo on Russian oil by the end of this year. Yet a ban on Russian gas has remained off the table because so much of Europe depends on it, and alternative sources are scarce.

Gas makes up a quarter of the bloc’s energy mix — it fuels factories and electric power plants, and it is overwhelmingly what Europeans use to heat their homes. Major disruptions would affect not just industrial output, but also Europeans’ ability to stay warm through the winter.

European officials have been scrambling to line up alternative sources of gas and other fuels. Prime Minister Mario Draghi of Italy signed a deal that would increase his country’s imports of Algerian gas 20 percent in the short-term. President Emmanuel Macron of France increased his country’s supply of diesel from the United Arab Emirates — one of many European deals that lean into dirtier fossil fuels like oil and coal to make up for the diminishing supply of gas.

The European Commission is also trying to secure more gas from other established suppliers for European countries, such as Nigeria, Egypt and Qatar, while Norway, a neighbor and close ally, has already boosted its supply to the bloc.

Another short-term move is importing liquefied natural gas from the United States, following a pledge by President Biden during a visit to Brussels in March, but experts warn that it is an expensive alternative, in limited supply.